What is tilapia? The common name tilapia covers almost a hundred species of chiclids belonging to Tilapiini, a tribe within the family Cichlidae. Many species, hybrids and variants of tilapia fish are easy to raise […]

What plants can you grow in hydroponics?

Below you will find a few examples of food that can be grown in hydroponic set ups, and that are fairly easy to cultivate. You don’t need to be an experienced hydroponic grower to find […]

Passive Bucket If you want to try out the concept of hydroponics without dedicating a lot of space or money to it, this is a great beginner project. You need: A bucket with a lid […]

Passive Bucket If you want to try out the concept of hydroponics without dedicating a lot of space or money to it, this is a great beginner project. You need: A bucket with a lid […]

What is tilapia? The common name tilapia covers almost a hundred species of chiclids belonging to Tilapiini, a tribe within the family Cichlidae. Many species, hybrids and variants of tilapia fish are easy to raise […]

Passive hydroponics is a method where plants are grown in a very porous medium instead of traditional media such as soil, bark or peat moss. Water and nurients are transported from a separate nutrient solution […]

Hydroponics is a method of growing terrestrial plants using a nutrient solution instead of soil. In some hydroponic setups, the roots of the plant are supported by a medium, such as gravel or coco peat.

In the 21st century, hydroponic cultivation of food has increased dramatically, and some of the food you’ve been munching down this week might have been hydroponically grown without you even realizing it. The global hydroponics market was estimated at over 225 million USD for the year 2016, and is expected to be near 725 million USD by 2023.

One of the early actors in the United States was EuroFresh Farms in Arizona; they were a trailblazor for large-scale hydroponics cultivation in rockwool, and even back in 2007 they sold more than 200 million ponds of hydroponically grown tomatoes. After they filed for bankruptcy, their hydroponic systems were taken over by NatureSweet Ltd.

In the United States, one of the main scientific researchers of hydroponic set ups is NASA. Through their Controlled Ecological Life Support System (CELSS) project, hydroponics is being investigated as a possible solution for providing food for long-distance space travel and human settlements outside our homeplanet. Some of the research going on concerns the use of manure and other byproducts as fertilizers for the hydroponic system, instead of relying on factory-made chemical fertilisers.

All this might sound very high tech, but the history of hydroponics research is quite long. We do for instance know that the scientist and statesman Fancis Bancon wrote about how to grow terrestrial plants without soil in his book Sylva Sylvarum (A Natural History). It was published in 1627, the year after his death. Sylva Sylvarum helped boost the interest in “water culture” in Europe, especially in England.

Another notable name in the history of water culture is John Woodward (1665-1728), a naturalist and geologist who championed the importance of observation and experimentation in research. In 1699, he published his observations regarding spearmint cultivation in water. One notable remark from him was that plants in distilled water did not grow as well as plants cultivated in less-pure water.

There are a large number of promising upstarts that focus on hydroponics that you can invest in.  Some of these are small penny stock while others are larger companies.  Investing in a small company allows you to earn a higher return but is also a lot riskier.  I recommend that you invest in medium-sized to large companies that have a proven track record.  You will have to pay a premium for this but it is worths it since the company is a lot less likely to fail and go bankrupt.  If you want to invest in stock in a hydroponics company you need to open an account with a stock broker such as eTrade, TD Ameritrade or RobinHood.

Even though the plants in a hydropnic set up aren’t planted in soil, many hydroponic systems to utilize some type of substrate. Which one that is ideal depends on a wide range of factors, and many successful hydroponic projects use a combination of several media.

Below you’ll find a few examples of substrates commonly used in hydroponic systems.

Expanded clay pebbles is a lightweight aggregate made by heating clay to around 1,200 °C in a rotary kiln. It is known under several different names, such as Exclay and Lightweight Expanded Clay Aggregate (LECA).

During the time in the kiln, gases inside the clay expand, causing thousands of minimal bubbles to form in a honeycomb structure within each pebble.

Expanded clay pebble are a popular choice for hydroponic systems since they are pH-neutral and doesn’t release any nutrients that could make it more difficult to regulate the nutritional balance in the nutrient solution. They are light-weight and does not compact much over the lifetime of the set up. Also, it is possible to take out the pebbles and sterilize them, e.g. to use in another set up or to combat plant disease/pests. (The can handle cleaning methods such as heat, strong sun, chlorine bleach, hydrogen peroxide, and strong vinegar.)

For some growers, the fact that clay is a sustainable material is also a big plus.

Expanded clay pebbles are commercially available in various sizes, shapes and densities, so it is possible to experiment a bit with different choices for your hydroponic set ups.

This is another very common choice for hydroponic set ups. Mineral wool is a fibrous material formed by spinningor drawing molten mineral or rock materials, such as slag and ceramics. It is commonly used as heat and sound insulation in buildings.

In hydroponics, mineral wool is appreciated for its high capacity for capillary action and for being very resilient to microbiological degradation. It can be engineered to hold large amounts of water and air to aid root growth and nutrient absorption. Mineral wool is also a good mechanical support that provides stability for the plant.

In commercial setups, mineral wool commonly used for the seedling stage and for newly cut clones, but you can use if for the entire life of the plant if you want to.

Important: Mineral wool usually have a naturally high pH (i.e. it’s alkaline). Before it is used in hydroponics, its necessary to condition it to prevent it from making the water overly alkaline.

Warning: Mineral wool can irritate the skin. (It’s a mechanical irritation – it’s not caused by any toxin.)

Growstones are made from recycled glass, and can be purchased in a variety of sizes. Compared to perlite and peat, growstones have more water retention space per litre. 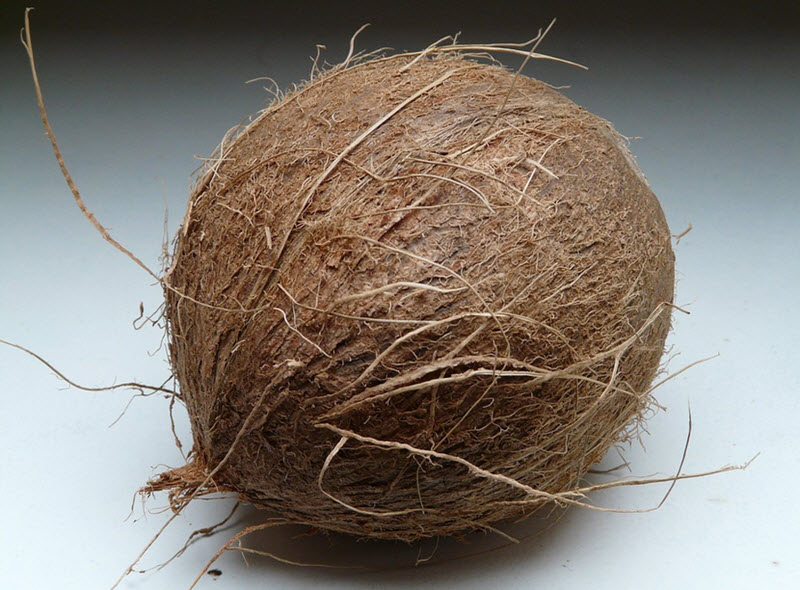 Coir is a natural fibre extracted from the husk of coconuts. It is the fibrous material found between the outer coat of the coconut and the hard, internal shell.

When you put coir into a hydroponic system, it is likely to be colonized by trichoderma fungi. This is not a problem – it is actually a benefit since this fungi stimulates root growth and help protect the roots. Plant roots tend to thrive in coir.

Coir is also popular for its ability to store unused nutrients and keep them until the plant needs them.

Using parboiled rice husks for your hydroponics is a great way of taking a waste product from agriculture and turning it into something useful.

An important aspect to take into account is that parboild rice husks are biodegradable and will decay over time. This can have both positive and negative effects, depending on the situation. You will for instance need to buy new rice husks to replace the decayed ones. A positive effect is that the plants can absorb nutrients released from the husks.

Perlite is a amorphous volcanic glass, typically formed by the hydration of obsidian. (An amorphous substance is a solid that lacks the long-range order that is characteristic of a crystal.)

Perlite occurs naturally. Just like other forms of volcanic glass, it is the result of rapidly cooling magma.

Commercially available perlite looks like glass pebbles. Perlite is lightweight and can either be used loose in the hydroponics set up or in plastic sleeves that brings more stability.

Perlite is sometimes used to save hydroponic set ups that has decayed to a point where the roots are surrounded by too much water and too little air. In such situation, perlite is gradually mixed in to increase the amount of availble air.

Vermiculite is a hydrous phyllosilicate mineral. Some of the largest vermiculite mines are located in Russia, China, South Africa, and Brazil.

Compared to perlite, vermiculate holds less air but more water. It also has a natural “wicking” property, which means that it can draw water and nutrients in a passive hydroponic system.

Pumice is a volcanic rock consisting os highly vesicular rough textured volcanic glass, which may or may not contain crystals. It is usually light colored. When pumice is powered or turned into dust, it is sold as pumicite.

Pumice is created by super-heated, highly pressurized rock is violently ejected from a volcano and the stone cools down rapidly and the high pressure disappears very quickly as well. This is how the “foamy” texture of the pumice is created. As the pressure drops, bubbles are formed inside the rock (since the solubility of gases is higher at a higher pressure). Pumice is typically formed when the rock is ejected into water, since that makes the cooling processes extra rapid (compared to air).

Pumice floats on water, which needs to be taken into consideration when creating a pumice set up for hydroponics.

Many types of gravel can be used in hydroponic systems, but it is important to inform yourself first since some types will tweak the water chemistry in an undesirable way (or, at the very least, a way that you need to take into account).

One way of getting “safe” gravel is to visit a aquarium shop and buy gravel that won’t impact the pH-value, water hardiness etc in an aquarium.

Gravel is often utilized in the type of hydroponic set ups where plants are grown in a filter bed where water is circulated by electric powerhead pumps. (Also available in the aquarium store.)

Compared to many other types of media, gravel is heavy. This can be both positive and negativ.

Gravel drains well and does not become waterlogged.

Wood wool (wood slivers) has been utilized as a substrate for hydroponics since the early days of hydroponic research. It can impact water quality in various ways (both positive and negative for the plants) and not all wood wool function in exactly the same way, e.g. because different trees have different characteristics. Choosing the right wood wool is therefore of essence.

In Nort America, certain types of wood wool are sold as excelsior and used as a packing material.